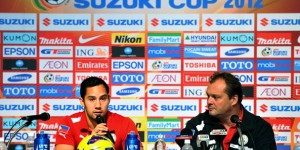 Worawi, a FIFA executive committee member, also insisted he was still president of the FA of Thailand (FAT), despite the Sports Authority of Thailand (SAT) saying he had lost the post.

Worawi said Lord Triesman’s allegations that he had demanded television rights for a proposed friendly between England and Thailand in return for his 2018 World Cup vote, made in Britain’s parliament last Tuesday, had tarnished his reputation.

“The claims which Triesman made are groundless and I am putting together a legal team to fight these charges,” he said.

“I have a very strong case and I will present evidence to prove these allegations are not true. I don’t know why they were made.”

The SAT said Worawi’s decision to postpone an election for FAT president on 6 May 2011 was illegal.

Because no election had been held within the required time limit after Worawi’s presidency expired at the end of 2010, his position was void, they said.

Worawi was to have been challenged for the presidency earlier this month, but the election was postponed when the executive board said some of the clubs had more than one voting representative.

But Worawi insisted that the election would take place next month and he was still in charge.

“I am still holder of the position and we will reschedule the election,” added Worawi, one of four FIFA executive committee members which Lord Triesman claimed had asked for favours in return for votes for England’s 2018 World Cup bid.

England’s Football Association has hired a lawyer to conduct an investigation into the claims of FIFA corruption during the bidding for the 2018 World Cup which England lost to Qatar.

The new corruption claims are set to play a major role in FIFA presidential elections on 1 June 2011, where the body’s president Sepp Blatter is seeking re-election against Mohamed bin Hammam of Qatar.