WOMEN’S FOOTBALL: VIETNAM IN SECOND ROUND OF 2012 OLYMPIC QUALIFIERS 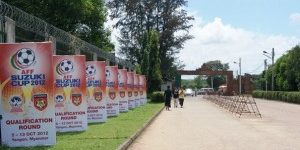 HANOI (5 April 2011) – The Vietnam national women’s football team made the second round of the 2012 London Olympics Asian qualifiers when they came back from behind to beat fierce rivals Thailand 2-1.

The win was Vietnam’s third on a trot in Group A after disposing Hong Kong 4-0 and then scoring a victory over Myanmar in their second match.

But against Thailand, the Vietnam girls almost came undone when just two minutes into the tie, centreback Bui Thi Nhu headed the ball into her net for an unlucky own goal. The score at the half was 1-0 to the advantage of the Thais.

However, Vietnam bounced back in the second half when strikers Nguyen Thi Hoa and Thanh Huong scored two goals for the win.

With the victory, Vietnam will take on hosts Chinese Taipei in their final Group A match.

The third round will feature the top five teams of the 2008 Beijing Olympic Games and they are Japan, China, South Korea, North Korea and Australia.

The six teams will then play in a one-round league format for the final qualification round on 1-11 September 2011 – with the top two teams represent Asia at the 2012 London Olympics.