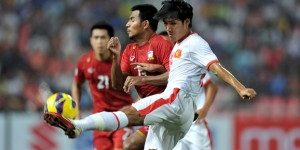 PHNOM PENH (25 June 2011) – Cambodia chief coach Lee Tae Hoon is demanding for more cohesion ahead of the team’s 2014 World Cup qualifying match against Laos at the end of the month.

Shortly after seeing his side beat Vietnam’s First Division side Kien Giang FC 5-1 this week at the National Olympic Stadium, Tae Hoon said that while he is happy with the score line, the team needs to be more cohesive and not lose shape.

“Against a side like Laos, we will have to play with lot more cohesion, skill and purpose,” said Tae Hoon.