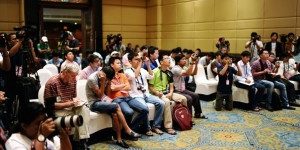 Datuk Worawi Makudi, the president of the FA of Thailand (FAT) announced that both sides have agreed on a three-year contract although the exact details of salary has not been immediately disclosed.

“He has possibly the best qualifications of any foreigner we have ever hired to coach the team. We are hoping that he can bring success to our team,” said Datuk Worawi.

Schaefer said: “I came here to start new development of Thai football by strengthening the overall structure. Producing young players is very necessary as I have done for several years in Germany.”

The 61-year-old Schaefer, had coached Cameroon at the 2002 World Cup where he also guided the country to their African Nations Cup the same year.

The former Moenchengladbach midfielder steered German side Karlsruhe to the UEFA Cup semi-finals in 1994 and was Stuttgart coach in 1998.

He had previously coached United Arab Emirates clubs Al Ahli and Al Ain with his last stint being with Azerbaijan club FK Baku.

PROFILE – AS A PLAYER

PROFILE – AS A MANAGER