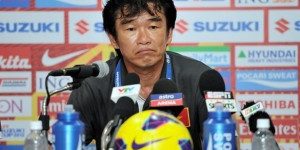 However, Kirivong bounced back in the second half through Oladiji Olatune in the 57th minute and Heng Kimhoung in the 74th minute to bring the game all square at 2-2.

But Sambo had the last say in the game when he nailed the winner deep in injury time for National Police to win all three points.

In the meantime, Prek Pra Keila were also on target for the full points as they disposed of Chhlam Samuth 3-2 in the other match of the evening.

Math Hosan gave Prek Pra Keila the lead on eight minute as Chhlam Samuth then fought back with two goals – Rous Somourn (31st minute) and Pov Somnang (39th minute) – for them to take a 2-1 lead at the half.

But the second half was all Prek Pra Keila as they then scored two further goals from Jamiv Adebayo (52nd minute) and Sen Soukey (69th minute) for the final score line.