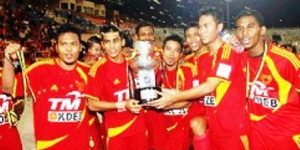 JAKARTA (13 March 2011) – Suhaizi Shukri will become the first Malaysian referee to officiate in an Indonesia Super League match (ISL) this afternoon when he takes charge of the game between Persija Jakarta and Persiba Balikpapan.

The game will be played at the Gelora Bung Karno Stadium in Senayan.

“I’m comfortable with the atmosphere here in Jakarta, it is much more lively and celebrated as compared to the same competition in Malaysia,” added Suhaizi.

Other than Suhaizi being the first Malaysian referee to officiate a game in the ISL, the PSSI had also previously used the services of another Malaysian – referee instructor Nik Ahmad Yaakab to streamline the running the of the referee department.

The PSSI decided to include foreign referees in their competition this year so as to raise the standard of the game on the whole.

“Of course, we hope that the AFC will recommend only the best referees in the region to be used in the ISL,” added Bambang Irianto, director of the PSSI Refereeing Department.