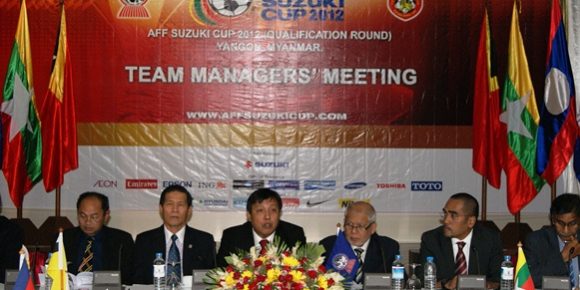 HANOI (3 April 2011) – Song Lam Nghe An (SLNA) grabbed the lead in the V-League following their close 1-0 away win over Navibank Saigon at the Thong Nhat Stadium.

With the first half ending all square, SLNA intensified their attacks with Derron coming close with a shot that went well over the crossbar.

Navibank tried to grab the initiative in the 63rd minute with Leandro missing the woodwork while five minutes later, Khanh Lam’s header hit the post instead.

But there was no denying SLNA in the closing stages of the game when Edmund Ansah rounded off two defenders and then the Navibank keeper before firing into the net in injury time.

The victory for SLNA was their fourth on a trot.

In the meantime, former champions Binh Duong were held to a 1-1 draw by defending champions Hanoi T&T at the Go Dau stadium.

Hosts Binh Duong took the lead just four minutes into the game when Leandro made good on a strike from Vu Phong before Matias made it all square in the second half.

With the one point, Hanoi T&T moved up to sixth from seventh.