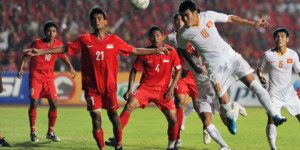 SINGAPORE (8 June 2011) – The Singapore national team crushed their counterparts from Maldives 4-0 at home at the Jalan Besar Stadium while the Cambodian national side edged the Malaysian Olympic squad 1-0 at the National Olympic Stadium in Phnom Penh.

Singapore, who recently made a revamp to their national side by introducing a handful of youngsters, seem to be inspired with new captain, 20-year-old Hariss Harun showing the way.

The Lions scored off a penalty on 13th minute off Qiu Li for the lead before nailing getting his second of the evening barely six minutes later and then  completing his hat-trick at the half hour mark.

Veteran Aleksander Duric rounded off a fine evening for the home team with the fourth and final goal in the 49th minute.

“I feel that we did well to get a good 4-0 victory over Maldives and we can only continue to do well as a team. The fans were fantastic and although the stadium was not a full-house, it is up to us the team to win the fans back. But these fans, their cheering and new chants were great,” said Hariss after the game.

In the meantime, the Cambodian national side carved out a 1-0 win over the Malaysian Olympic squad – with the only goal of the game coming in the 10th minute off Kouch Sokumpheak.