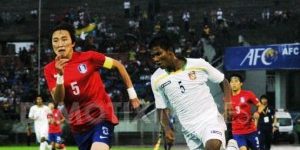 Although it was a great result, Malaysian coach K. Rajagobal said there’s still the second leg to go and the game was far from over.

“The game was quite even in the first half although I thought that we were a little too eager where the execution in the final third was sloppy,” said Malaysian chief coach K. Rajagobal.

“Okto (Vianus) was a handful but the other two strikers (Christian) Gonzalez and Yonki (Ari Bowo) were not too dangerous even though they came close on some occasions.

“I thought that we deserved to win because we were more aggressive in the second half but the job is not over yet. There’s still another 90 minutes to play for.”

The Malaysians, playing in front of a capacity crowd which included No. 1 fans – FAM president Sultan Ahmad Shah and his deputy Tengku Abdullah – and some 15,000 Indonesian supporters, rose to the occasion and delivered a stunning performance to take a comfortable cushion to Jakarta for the return leg on Wednesday night.

Mohd Safee Sali was the hero of the team with two goals while Mohamad Ashari Samsuddin netted the other.

“The first goal spoiled it for us, I don’t know what happened to the defence after that,” quipped Indonesia chief coach Alfred Riedl.

“It was a normal match in the first half and even at the start of the second half. But after the first goal, I don’t know what happened to the defence. The individual mistakes cost us the game and after that first goal, the other two goals just came in.

“Today we were just too far away from the Malaysian goal.”

It was a tremendous atmosphere the game kicked off to and the players responded by going all out to get the goals. The Malaysians charged forward with S. Kunalan and Mohd Amirulhadi Zainal providing support from the flanks.

It was not long before they got their first look but Kunalan’s shot was saved by Markus Harison. Amirulhadi then let loose a shot but was also off the mark, and that was the only other clear shot the Malaysians had in the first half.

Indonesia also made some serious moves but like Malaysia failed to get their shots in. Skipper Firman Utina was his usual self and masterminded the team’s attacks but his passes through to the forwards were not converted.

Oktovianus Maniani, one of the most impressive players of the tournament so far, will see no further action after tonight as he picked up a booking in the 5th minute.

Malaysian defender Mohd Asraruddin Putra was carded in the 33rd minute but the blow for the host was when Amirulhadi was booked in injury time.

This was his second booking in the semifinal-final round and like Oktavianus will have to watch from the stands in Jakarta.

The second half came alive on the hour mark as striker Norshahrul Idlan Talaha, who got married the previous day, burst through the defence to cross to Safee who swept the ball in.

Eight minutes later, Norshahrul was in the thick of action again when he set-up Mohamad Ashari who doubled the score for the home side.

Despite some efforts from Indonesia to sneak in a goal, the Malaysians, their confidence boosted by the two goals, pressed on and picked up a third in the 72nd minute when Safee headed in a cross from Safiq Rahim.

Indonesia, led by strikers Christian Gonzalez and Yongky Ari Bowo, threw in everything they had and had several looks at goal but failed to convert any of them.

In the last ten minutes, Indonesia missed out on turning in at least one of the two free kicks they had. One goal from Indonesia here where the away goals rules apply, would make a world of difference when they host Malaysia in Jakarta in three days.