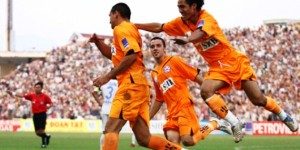 The 26-year-old emerged as the top hitman at the just concluded AFF Suzuki Cup 2010 when he blasted in five goals to help Malaysia win the coveted ASEAN title for the first time ever.

“As a professional, it is always my desire to continue to hone my skills and if playing abroad is the way forward, why not?” quipped Safee.

To questions if he might consider playing in Indonesia – the team which Malaysia beat to win the crown this year, Safee added: “sure why not? I don’t see the reason why I will not play here.

“I know that the Indonesian Super League is very competitive and it is also well attended. It will be an interesting proposition and one which I will cherish to consider when the time comes.”

Estimated to have scored some 108 goals through this career thus far for club and country Safee had earlier played for Kuala Lumpur and Sarawak before settling to play for Selangor, his current employers.

Due to his playing style and also his robist physique, he has often been compared to Malaysia’s legendary striker Mokhtar Dahari.

And wearing the legendary No. 10 shirt has made the comparison more akin.

“Playing outside of Malaysia is something which needs serious consideration and I’m not at all closed to that possibility. If the situation is right, why not?” he added.