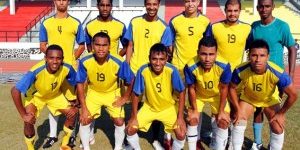 PHNOM PENH (14 March 2011) – Preah Khan Reach FC picked up their first major silverware when they beat Build Bright United 2-0 in the final of the Hun Sen Cup 2011 that was played at the National Olympic Stadium.

With Khuon Laboravy and international Sam El Nasa leading the attack for Preah Khan, it made all the difference against a hesitant Build Bright side.

Just before the half hour mark, Sam El Nasa pounced on a loose ball for the lead before Khoun Laboravy added the second goal off a header from Prak Mony Udom to wrap up the win for Preah Khan.

Other than winning the crown for PKR, the goal for Khuon Laboravy confirmed his place as the tournament’s top scorer with 22 goals while Ouk Mich picked up the award for the Best Goalkeeper.

“It has taken us so long to win something big like this. Now that we have broken the jinx I am certain the team will win many more,” said Preah Khan Reach chief coach Rith Dikar, whose team also picked up 80 million riels (USD 19,875) prize money.

“It was a tough game even though we won by two clear goals. There were some anxious moments, but our backline and the goalkeeper did a splendid job.”

Build Bright chief coach Meas Sam Oeurn: “we had our chances, but we could not convert them and that made all the difference.”

“I am terribly disappointed we couldn’t win after having come this far, but I am glad to be associated with the team’s best ever finish so far.”

In the meantime, Prime Minister Hun Sen donated USD50,000 to the Football Federation of Cambodia (FFC) for their developmental work.