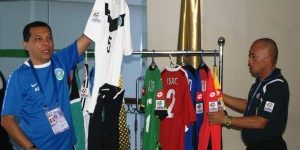 Njoku Kingsley Metu grabbed the lead as early as the sixth minute for Phnom Penh Crown as the former champions steadily stayed in front at the half.

But international Khuon Laboravy then found he equaliser for Preah Khan in the 62nd minute before Chan Chaya then gave Phnom Penh the lead once again on 77 minute.

However, it was all square once again three minutes later when Phany Rotha scored the all-important goal for Preah Khan to share point.