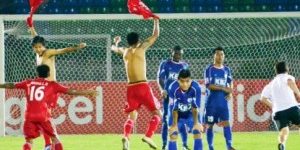 MANILA (6 May 2011) – The quarter-finals of the PFF-Suzuki Men’s U23 National Championship gets underway this week with Negros Occidental FA leading the chase for a place in the semi-finals.

The Negros Occidental FA will battle three other regional finalists – No. 2 team from the National Capital Region, Mindanao regional finalist Zamboanga del Norte-Dipolog and Luzon regional titlist Masbate – in Group A at the Panaad Park and Stadium.

Group B in Laguna will see Visayas No. 2 team Iloilo FA, the No. 1 from NCR, Mindanao top finisher Davao squad and Luzon’s No. 2 team Laguna battling it out.

The top two teams from the two groups will then advance to the semi-finals where they will play on a home-and-away forma to decide the finalists.

The Philippines Football Federation (PFF) have announced that the national selectors will use the final match of the PFF-Suzuki Men’s U23 National Championship to select players for the SEA Games at the end of the year.