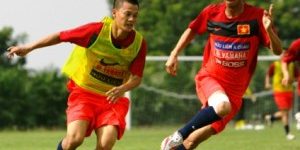 PHNOM PENH (9 June 2011) – National Police fortified their position in mid-table of the Metfone Cambodia League 2011 with an easy 3-1 win over Chhlam Samot this week.

But newcomers Chhlam Samot did well in the first half of the game to hold National Police scoreless before the latter finally made the score sheet with the lead on 69 minutes off So Rasy.

Moeurng Phanith then added the second goal for National Police in the 78th minute as Chhlam Samot then crawled back with their first goal of the game from Meas Sophanna 79th minute close range effort.

But National Police made sure of the full points with their third goal of the game from Sim Vatha seven minutes to the end.