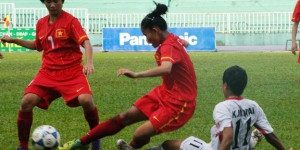 In front of a crowd of close to 4,000 at the National Olympic Stadium, Naga Corp took the lead in the 34th minute off Kob Sa for them to take just a 1-0 lead at the break.

But National Police fought back in the second half for Sok Phal Odam to equalise on 57 minute as both teams were tied 1-1 at the end of regulation.

With the win, Naga Corp FC will face Preah Khan Reach in the first semi-finals on 5 March 2011.

In the meantime, National Defense Ministry need not go through all the drama as they made short work of Kirivong with a 4-1 win.

The score at the half was 1-1 with Keo Vanak scoring for National Defense in the 32nd minute which was cancelled out by Chhaing Sophal ten minutes later.

National Defense stepped up a gear after the break and Keo Vanak duly completed his brace with the second goal on 59th minute as Phlong Chanthou (61st minute) and Chhin Chhrouen (90th minute) then completed the goal haul.

In the semi-finals, National Defense will be up against Build Bright United on 6 March 2011.