MINH PHUONG AND KIM HONG THE BEST IN VIETNAM 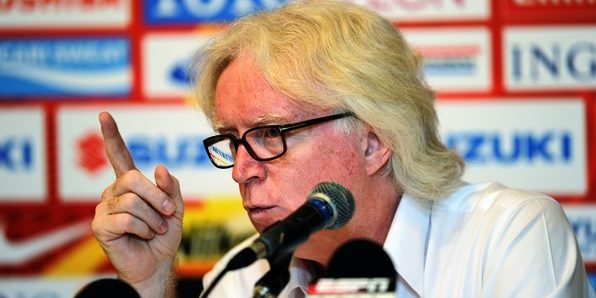 HANOI (15 May 2011) – Nguyen Minh Phuong and Tran Thi Kim Hong have emerged as the best footballers in Vietnam following the Golden Ball Awards 2010, which took this week at the Ben Thanh Theatre in HCM City.

Midfielder and former national captain Minh Phuong grabbed the Golden Ball award for the men while midfielder Kim Hong of HCM City won the award for the women’s division.

Minh Phuong emerged victorious with a score of 387 points – a runaway winner ahead of Pham Thanh Luong, who won the Silver Ball with 132 points.

Nguyen Vu Phong was presented with the Bronze Ball award with 89 points.

“Although the national team did not achieve the desired results in 2010, the players still played with a lot of enthusiasm,” said Phuong, who plays for SHB Da Nang in the V-League.

“I’m very happy being awarded this prestigious Golden Ball prize. It is the recognition from coaches, journalists and my colleagues.”

In the women’s division, midfielder Kim Hong picked up the Golden Ball award with 283 points – just 25 points ahead of team-mate and   goalkeeper Dang Thi Kieu Trinh, who won the Silver Ball with 258 points.

“This achievement comes from my efforts and the guidance from my coaches. I will always try my best to deserve this prestigious prize,” said an emotional Quyet, 20, after receiving the trophy.

There was some surprise in the Best Foreign Player award when Nigerian striker Samson Kayode got 59 votes – 10 more than Argentinian striker and the V-League 2010’s top scorer Gaston Merlo.

“I am very surprised about the award because I thought Merlo would win it because he was the highest scorer last season,” Samson said after receiving the prize.

“But I think that my assists and commitment to Dong Thap made me the winner today. I am very happy to play football in Vietnam at the moment.”