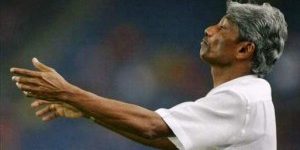 KUALA LUMPUR (10 March 2011) – Malaysia and Thailand eased into the second round of the 2012 Olympic Games qualifiers while ASEAN neighbours Indonesia and Myanmar fell after the second leg of the first round matches.

The Malaysians had their 2-0 win in the first leg in Kuala Lumpur to thank in their win over Pakistan – following the second leg scoreless draw in Lahore last night.

The Thais in the meantime, can consider themselves lucky for making into the next round where they had to fight tooth and nail before being able to win the tie against Palestine 6-5 on penalties.

The score after the first leg in Bangkok was 1-0 to the advantage of the Thais but Palestine’s first international qualification match on home soil saw them fighting back to draw level 1-1 at the end of regulation when midfielder Abdulhamid Abuhabib slammed home on 45 minutes.

Thailand were down to ten men when in the 68th minute, Theerathon Bunmathan was sent off.

But with neither side able to change the score line even after the additional half hour, Seeket Madputeh emerged the hero for Thailand by scoring the decisive spot-kick.

Indonesia’s aspiration for a place in the next round of the 2012 Olympic Games qualifiers were denied by Turkmenistan following their 4-1 aggregate loss.

Ruslan Mingazov struck the only goal of the second leg in the 25th minute at the Ashgabat’s Olympic Stadium – to add further luster to Turkmenistan’s impressive 3-1 first-leg triumph in Indonesia.

It was not only Indonesia who had a bad night where Myanmar were also shown the exit when they allowed India to score a last minute winner.

Having a 2-1 advantage going into the game at the Youth Training Centre in Yangon, the homesters found the equaliser on 64th minute from Kyaw Ko Ko, which should have given Myanmar the advantage on the away goals rule.

But Sathyan Sabeeth had the last say in the game when he scored in the 90th minute of play to guarantee India’s progression into the second round.

The second round will see the ten Round 1 winners joining the 13 highest ranked teams (based on the qualifiers and tournament proper at the 2008 Olympics in Beijing) in the Olympic Football Tournament London 2012 Asian Qualifiers Round 2 draw, which takes place at AFC House on 30 March 30.

On the other hand, the postponed match between Singapore and Yemen will now be played at the neutral venue of the Khalifa Stadium in Al Ain, United Arab Emirates.

The first round game will be played on 19 March with the return tie three days later.

FIFA and the AFC decided to postpone the tie initially planned for 19 February due to the political situation in Yemen.