KELANTAN TO HAVE NEW 40,000-SEATER STADIUM 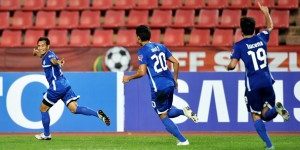 KOTA BHARU (20 May 2011) – Malaysia Cup champions Kelantan will finally have a new stadium with a capacity of 40,000 – following the approvals from the state government to build the new facility in Pasir Puteh to the tune of RM159 million (USD 52.4 million).

Chief Minister of Kelantan Datuk Nik Abdul Aziz Nik Mat said that the stadium will be built within a sports complex which will also have other sporting venues including a swimming pool.

The decision to build the stadium in Pasir Puteh was made due a new housing project being built in the area called Red Warriors City, named after the team.

“I’m really happy to make this announcement as it is for the benefit of the people of Kelantan to serve the sport loving populace,” added Nik Abdul Aziz.

“The stadium board has visited several stadia outside the country and so we know what shape the new stadium will take.

“Work can start almost immediately as afterall, the new facility will be built on state land.”

Kelantan currently play at the Sultan Mohammad IV Stadium in Kota Bharu which has a capacity of 30,000 and was built back in 1957.