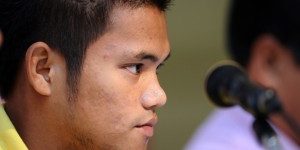 BACOLOD CITY (17 May 2011) – Iloilo FA will take on Negros-Occidental FA (NOFA) in the final of the PFF (Philippines Football Federation)-Suzuki Under-23 Championship final.

Iloilo got the best of start in the 23rd minute when Shirmar Felongco pounced on a defensive mistake for the lead before NCR managed to find the equaliser off striker Jon Melliza on 78 minute.

As NCR kept up the pressure for the winner, they unfortunately conceded a penalty seven minutes to the end when defender Deo Segunial was adjudged to have handed the ball inside the box.

Francis Gustilo did not disappoint from the spot.

“I knew the pressure was on them,” said Gustilo. “If I missed—but I knew I wouldn’t—the worst that could happen was we will go into extra time.”

Added Ilonggo chief coach Marjo Allado: “it was a good victory in front of the home crowd considering that the NCR team is very good, but a championship will be better.”

The final of the PFF (Philippines Football Federation)-Suzuki Under-23 Championship will be played over two legs later this week.

The first final will be played on 19 May with the return tie on 22 May.