HOUGANG HOPE FOR CHANGE IN FORTUNES WITH NEW NAME 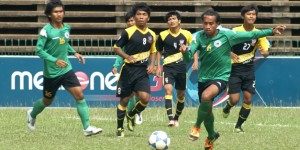 SINGAPORE (17 Jan 2011) – Hougang United FC are hoping that their recent change in name will translate into a change in fortunes when the new S-League 2011 season kick-off next month.

It is the fourth time that the Hougang Stadium-based team has changed their name since they began their professional debut as Marine Castle FC in 1998.

They then changed the name of the club to Sengkang Marine in 2002 before further changing their name to Paya Lebar Punggol FC three years later.

In 2006, Paya Lebar Punggol FC was changed to Sengkang Punggol FC. But for the new season, they will be known as Hougang United FC.

Hougang United FC chief coach Aide Iskandar said that it will take more than just luck to change the fortunes of Hougang where real hardwork will be in store for the team which has not been able to shake off their basement side tag. Last season, Hougang finished the year second from the bottom.

“We have a set of players whom we feel can make the difference and put up a consistent performance throughout the season,” said Aide.

Other than having the retained the likes of An Jae-Chul (from South Korea), Jordan Webb (Canada), Fadhil Salim and Ratna Sufian, Hougang United have also signed defender Shariff Samat and also veteran striker Mohd Noor Ali.

The team have also took on Diego Gamma from Brazil and Carlos Alberto from Argentina.

Towards making sure that they are competitive for the new S-League season, Hougang have played in a handful of friendlies which included a 2-0 win over Geylang United 2-0, a 3-1 victory over Woodlands Wellington and then a 1-1 draw against a visiting University Tokyo side.

“We will be playing against Selangor and Felda FC next week in Kuala Lumpur as part of further efforts to strengthen the squad,” added Aide.