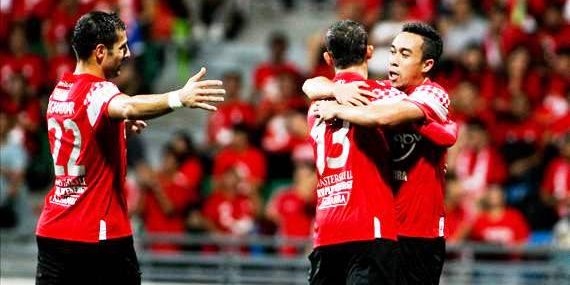 Hammam, in London to meet with senior members of the English FA ahead of the 1 June 2011 election, has vowed to double the current financial support paid annually to FIFA members to USD500,000.

However, the 61-year-old head of the Asian Football Confederation (AFC) rejected suggestions that the generous increase in money for development projects were a form of vote-buying.

“People want to hear what the candidate is going to help them with,” said Hammam.

“The need for the funds is essential for national associations – they need to have development projects, national teams, youth teams, facilities and it all costs money.

“This is not an improper act – people should know what I’m planning.”

Hammam’s pledge to increase disbursements have been followed by similar pledges from FIFA president Blatter with the 75-year-old Swiss incumbent responded with a vow to set aside more than USD1 billion over four years.

Hammam meanwhile said he was ‘well placed’ in his bid to dethrone Blatter, indicating he had received widespread support since declaring his candidacy.

“I have had a lot of support since declaring my manifesto and I think I am well placed,” said the Qatari.

“I said when I announce my candidacy that my chances were 50-50 and although I would not change that figure I am feeling confident.”

The FA has said it will decide on who to support in the FIFA election on 19 May 2011 but Hammam said he would not seek to exploit ill-feeling towards FIFA caused by England’s failed 2018 World Cup bid.

“I will not try to misuse this – I am more interested in explaining myself and my manifesto,” he said.

“I have a good relationship with the FA and the Premier League and I hope every member association will give me the opportunity to present my vision for the future.”

Hammam also hope that the final weeks of the election campaign would not be marred by personal attacks.

“I hope it will remain to be fair play. I’m only interested in doing what I can to promote myself, to speak about my business, my manifesto.”

Malaysia to test against Brunei and Hong Kong
May 17, 2022