GOETZ CLOSE TO SIGNING AS NEW CHIEF COACH OF VIETNAM 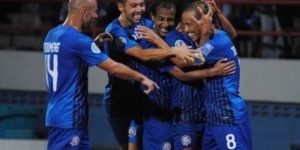 HANOI (9 May 2011) – Falko Goetz is close to be signed as the new chief coach of Vietnam following the agreement reached with the Vietnam Football Federation (VFF).

Goetz’s representative Andrea Milz confirmed this week that the two sides have agreed on wage terms and contract duration with just a few minor details to be ironed out before signing the contract.

The contract period will be for two years with the missions clearly stated out.

There were other interested parties for the job left vacant by Henrique Calisto but Bulgarian great Hristo Stoichkov did not have a formal discussion with the VFF while Frenchman Pierre Lechantre and American Steve Sampson was reported to have asked for a higher renumeration.

Other candidates sifted from the list of 40 possibilities were Juergen Gede from Germany and Eduardo Martinho Viganda from Portugal.