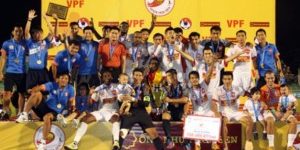 MANILA (1 Feb 2011) – Dick Emperado from the Negros Oriental FA was appointed as head of the FA of the Phiippines (PFF) Competition Committee while Cebu FA president Richard Montayre will take the lead in Grassroots and Youth Development.

The appointment follows the first meeting of the PFF’s Board of Governors (BOG) on the weekend.

“We can now move forward and look at the future of football in the country and with the entry of sponsors, we now have the resources to implement programs,” said PFF president Mariano ‘Nono’ Araneta.

At the meeting, it was also decided that several national tournaments will be undertaken as late as early March.

National tournaments will be conducted in the Under-16, U19 and U2 categories – which would also be made as selection for the national teams who will be seeing action in the Asian Federation Confederation (AFC) tournaments abroad.

A ‘Festival of Football’ will also be conducted for the U14 girls and U13 boys.

A ‘club championship’ will be organised which is open to all club members under PFF with provincial elimination rounds to be conducted with the winners representing the province in the regional eliminations and on to the national finals.

“With the way the board discussed and resolved topics, Philippine football is in for a good ride. I am confident that football is here to stay,” Palami said.

Apart from the above, the other appointments include Arturo Pacificador (from Laguna FA) for Finance Committee; Mike Batiles for Referees; Carpio for Memberships; Caritativo for Media/Press; Charlie Cojuangco (Negros Occidental FA) for Technical and Carlo Rodriguez for Women’s Committee.

FIFA sells out all sponsorship packages for the FIFA World Cup Qatar 2022™
November 29, 2022