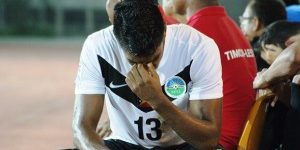 Cong Vinh, who recently recovered from a knee surgery, added to his two-goal tally last week with the second goal for Hanoi this time round after Argentinean Marronkle Gonzalo had opened the scoring just five minutes into the game.

Hanoi’s domination of the midfield gave allowed them to control possession through the excellent work of Gonzalo, Vinh, Ngoc Duy and Van Quyet.

But after going two goals in front, Hanoi allowed Brazilian striker Thiago Dos Santos to pull a goal back for Hai Phong in the 64th minute – much to the delight of the 15,000 home fans.

However, Cristiano Roland finished the game off with the third and final goal for Hanoi in the 73rd minute.

With the three points, the Hanoi side climbed up to fourth while Hai Phong dropped to 11th.

Hosts Song Lam Nghe An cruised to a 2-0 win over bottom side Ha Noi ACB with Hoang Anh Gia Lai held to a 1-1 draw by Navibank Sai Gon.