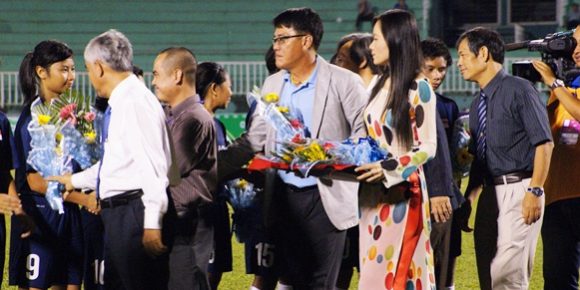 Build Bright scored one of their more memorable victories in years when they edged out powerhouse Phnom Penh Crown 5-4 on penalties as Preah Khan steamrolled over Prek Pra Keila 5-1.

The game between Build Bright and Phnom Penh was tight to say the least when both teams held out to a 2-2 draw at the end of the extra time.

Phuong Narong took the lead for Phnom Penh on 12 minutes.

But Nuth Sinuon slammed two quick goals in the 20th and 25th minute for Build Bright to take a 2-1 lead before Sok Pheng then pulled in the all- important equalizer for Phnom Penh in the 31st minute of play.

And even though Build Bright lost Hem Simay just before the end, they still managed to have the confidence to win 5-4 on penalties.

In the meantime, Preah Khan Reach had little resistance from Prek Pra Keila even though the latter did grab the first goal of the game in the seventh minute through Mat Hosan.

But Khuon Laboravy then scored his first goal in the 40th minute to put the score at 1-1 at the half.

The restart saw Preah Khan stepping up a gear to score through Toum Saray (57th minute) and Phany Ratha (73rd minute) for them to take a 3-1 lead.

Khuon the completed his hat-trick with two more goals deep in injury time for a comprehensive Preah Khan victory.