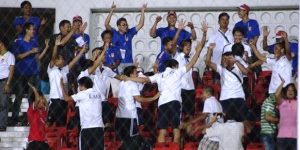 JAKARTA (19 April 2011) – Not long after securing the commitment from Real Madrid FC to open a football school in Indonesia, another Spanish giant seems to follow suit with Barcelona FC announcing this week that they will be following along similar lines, and more.

South East Asia’s most populous nation had earlier confirmed the opening of a Social Football School by the nine-times European champions Real Madrid.

And this week Sandro Rosell, the president of Barcelona FC confirmed the move to have a Social Football School in Indonesia as well following his meeting with Indonesian ambassador to Spain, Adiyatwidi Adiwoso, at the Camp Nou in Barcelona.

This was revealed by Krisnawati Desi Purnawestri, from the Indonesian Embassy in Madrid.

Other than the school, a friendly match will also be planned between the current Spanish champions and the Indonesia national team.

The move by the Indonesian Embassy in Madrid to initiate contacts with two of the biggest football clubs in Spain is seen as part of the bigger picture to not only develop football but also to foster better relations between the two countries.

Other than the school and the friendly match, Barcelona will also be assisting Indonesia with the ‘Trainer of Trainers’ programme to develop better quality coaches for the development of future players.