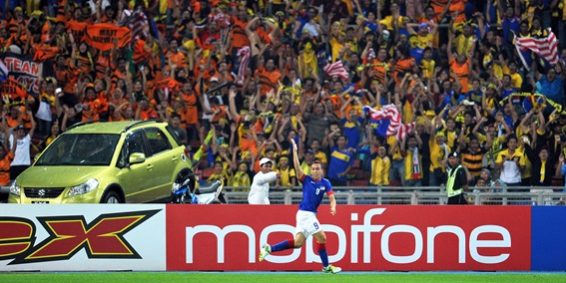 BANGKOK (10 Dec 2012) – It was a case of wasted opportunities for Malaysia and chief coach Datuk K. Rajagobal was lamenting on the lack of a capable finisher following last night’s 1-1 draw against Thailand in the first-leg, semi-finals of the AFF Suzuki Cup 2012 in Kuala Lumpur.

With regular striker Safee Sali injured and coming in only later in the second half of the game, Norshahrul Idlan Talaha has to play as the lone striker in a tie which the Malaysian needed to win to make sure that they have a chance for the return tie.

As things stood, Thailand have a huge advantage for the game at the Supachalasai Stadium on 13 December 2012 where with the away goal rule, they just needed a draw to show Malaysia the exit and confirm their place in the final.

“We should have won by 3-1 but the players played with a lot of discipline. I cannot ask for more from a team that had started without the core players,” said Rajagobal.

“We were more attacking and had more penetration. We surprised them. We had the chance. Best game for Norshahrul last night and I personally thought that he had a better game than Teerasil (Dangda).”

For the moment, Rajagobal added that Safee is still doubtful alongside Shakir (Shaari) where he said that considering the physical nature of the game agains Tahiland, it will be very risky and irresponsible to put in players who are not 100%.

There are also knocks on Gary (Robbat) and Amar (Rohidan) so the chances of them playing would depend on how they shape up in these few days here in Bangkok.

“We have to come up with a game plan. We got to be optimistic as it will be tough in Thailand,” added Rajagobal. “We will have to play our very best against a team which everyone says is the favourite team this year.

“The reality is that Thailand is a strong team and now they are playing at home. I just told the players that for the return leg, to just go out and enjoy themselves and get the result. Football is very unpredictable.”