ASC2012: Thais Have Edge Thanks to Teerasil Equalizer 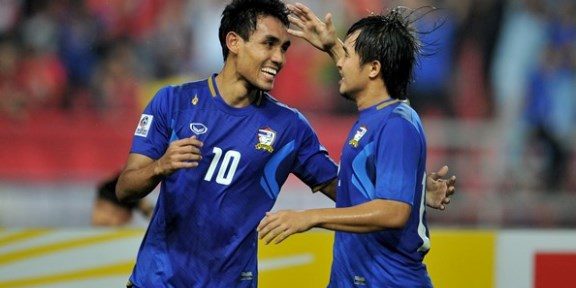 KUALA LUMPUR (9 Dec 2012) – An equalizer by danger man Teerasil Dangda provided Thailand with a crucial away goal advantage in their 1-1 draw against defending champions Malaysia at the National Stadium here tonight.

Malaysia took the lead through striker Norshahrul Idlan Talaha early in the second half but Teerasil’s powerful header 10 minutes from time crushed Malaysia’s hopes of heading to Bangkok with a slim advantage. Thailand will host Malaysia on Thursday where they will start the game trailing by a goal due to the away goals rule.

“To come here and score one goal is fantastic!” exclaimed Thai coach Winfried Schaefer after the match. “We were not playing well in the first half but we improved after Malaysia scored.”

Although Malaysia started without strikers Wan Zack Haikal and Safee Sali, the hosts were all over the Thai defence. Led by Norsharul Idlan Talaha and Baddrol Baktiar and supported by Safiq Rahim, the trio combined well to create massive problems for the Thais.

In the dying minutes of the first half, Thai keeper Kawin Thamsatchanan was scrambling to keep his goal clean. But it was Thailand who had the better start. Among their attempts was a sizzling strike from Adul Lasoh but it was well saved by Farizal Marizal.

Malaysia rattled the Thais in the 19th minute after Safiq’s somewhat weak free kick was cleared. Bunyamin Umar picked it up and floated his cross in but an unmarked Azammuddin Akil was not in the best of positions to connect the ball in.

In a space of four minutes, Thailand had two great chances to get ahead. In the 26th minute, Phitchipong’s powerful drive from outside box turned left at the post. Teerasil Dangda, after being put through by Datsakorn Thonglao, raced down to the touchline and cheekily played it back towards Jakkapan. Fortunately for the hosts, Farizal read it well and intercepted the short cross.

Just past the half hour mark, Baddrol, lurking at the near post, had the stadium on their feet when his flick from a corner kick from Safiq hit the post. Two minutes later, Safiq’s freekick from the far corner was pushed out by the goalkeeper.

Three minutes after the break, the fans had their chance to scream their lungs out. Norshahrul Idlan finally ended his barren run in this tournament with a brilliant header off a neat cross from Mahali Jasuli on the right. He slipped in between two defenders to place Malaysia ahead.

In the 64th minute, Norsharul struck from close range but Kawin managed to push it away. A few minutes later, Apipoo Suntornpanavej’s long drive was caught by an alert Farizal.

Ten minutes later, Datuk K. Rajagobal made a double substitution when he replaced Amr Rohidan and Baddrol Bakhtiar with Safee and S. Kunanlan in the 74th minute in a bid to spice up the attack.

The handful of Thai fans were finally heard in the 79th minute. Striker Teerasil leapt high and headed into the top corner, well beyond the reach of Farizal, to provide an important away goal for the Thais.

Minutes later, Thai coach Shaefer, was sent off by referee Torki Ramezanali of Iran for his behavior against the fourth official. In the dying minutes, Malaysia almost made it but Safee’s header from inside the six-yard box failed to beat Kawin. “There’s still another 90 minutes to play for and in football, anything can happen,” quipped Rajagobal afterwards.

The second leg semifinal game will be staged in Bangkok on 13 Dec.