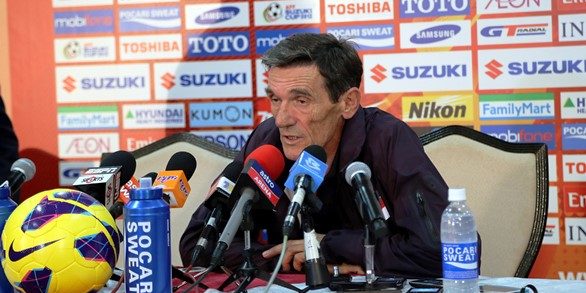 SINGAPORE (11 Dec 2012) – Playing on home turf will provide Singapore with an advantage in the second leg AFF Suzuki Cup semi-finals. But this edge will amount to nothing if the Lions are unable to lift their spirits, similar to that in the first leg in Manila, at the Jalan Besar Stadium tomorrow night.

“The job is far from done yet. We still have another 90 minutes to go to try and make it to the final. I will be happy if the team shows the same spirit they did in in Manila,” said Raddy Avramovic, who feels a performance similar to the first leg would be enough to tip the game in Singapore’s favour.

“They must now show their strength. The players must do their part, they have the quality to do it,” said the two-time AFF Suzuki Cup winning coach.

Recalling the first leg, Avramovic said that his strikers, led by Alexander Duric, would be retained for the final. “Although they did not score, you have to look at the character of the strikers in that match, they created the chances. So yes, there will be no change with the strikers.”

In the first leg, Duric along with Mohammad Khairul Amri and Mohamad Shahril Ishak combined well and created several chances but were unable to make them count. This time though, Avramovic hopes they will deliver the goods.

The strikers however will have to try and get the better of goalkeeper Eduard Sacapano who has been in excellent form. Since conceding two goals to Thailand in the opening match, Sacapano has kept his goal intact in the last three matches.

Asked if his team were prepared for the shoot-out., he said: “We have not been training specifically for this, we train as we always do.”

FIFA sells out all sponsorship packages for the FIFA World Cup Qatar 2022™
November 29, 2022