ASC2012: It Will be Like Playing in Barcelona – Schaefer 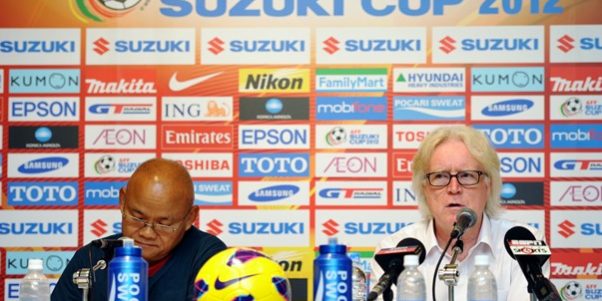 KUALA LUMPUR (8 Dec 2012) – Winfried Schaefer, the chief coach of Thailand, is looking forward to playing in front of 90,000 fans at the National Stadium in Bukit Jalil where he has likened it to playing in Barcelona.

“I’m really looking forward to the game at the Bukit Jalil with 90,000 screaming fans, it is like playing in Barcelona and that is what all coaches look forward to,” said Schaefer at the pre-match press conference this morning.

“Maybe we can make 90,000 (Malaysian) fans not happy but it will not be an easy match. It will be difficult.

“It will be 50-50 as Malaysia have a good team and they are playing at home. They lost their first game and then came back. We have respect for this team.”

Schaefer added that for the moment, the Thai team is in good terms with good spirit.

Asked on the condition of midfielder Datsakorn Thongloa, who was down with a groin injury since the team’s first game in the group against the Philippines, Schaefer replied that the Muang Thong player is back.

“Datsakorn can play tomorrow. His character is very good, comes for training and always asked for more,” added Schaefer. “He is an important player; he is the head of the team.

“He is already in training, so it will not be a problem.”