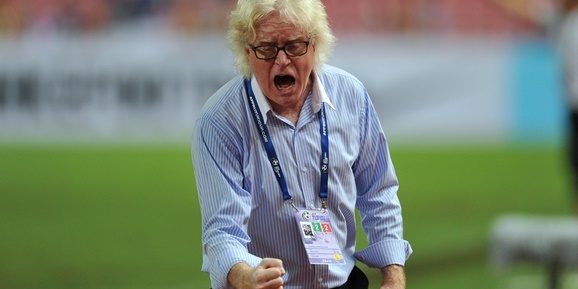 BANGKOK (10 Dec 2012) – Winfried Schaefer is a consummate professional. Full of passion each time he is by the sideline, his overwhelming desire to see a win for Thailand has even drove him out of the bench and onto the terrace.

That was happened last night in the first-leg, semi-final match when Thailand held Malaysia to a 1-1 draw which in effect has given the Thais an advantage for the return game on Thursday.

But as Schaefer said after the game, he does not blame the referee for being red carded.

“It is difficult for the referee when he is in front of 80,000. He has to make the right decision. When he make a wrong decision against the host team, the 80,000 people will kill him,” said Schaefer after the match.

“But it is okay, I said something to the linesman about the referee, and he sent me to the tribune. But what can I do, it does not matter. The team needs me in Bangkok but what can I do.”

Asked if the referee had made a mistake when he did not wave play on at the tail end of the game, Schaefer said that the mistake was from their own players.

“Piyaphon (Buntao) made a mistake pass to Chonlatit (Jantakam) and that gave a big chance to Malaysia. They could have gone 2-1,” added Schaefer. “It was not referee’s mistake.”

Schaefer admitted that Thailand had difficulty playing in front of such a big crowd at the National Stadium in Bukit Jalil where at the start they lost possession too easily and made a lot of stray passes.

He said that the long balls from Malaysia were difficult for the Thais to handle.

“We made too many mistakes in first half, playing in front of 80,000 was a problem,” added Schaefer. “But after falling behind, we played better with more pressing. We had enough shots to get the goal. So to come to Kuala Lumpur and get 1-1 is fantastic.”