AFF U16: LAOS TOP GROUP A AFTER WIN OVER INDONESIA 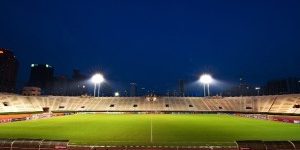 VIENTIANE (11 July 2011) – Hosts Laos recorded their second straight victory in the AFF Under-16 Championship after securing a 2-0 win over Indonesia at the National Sports Complex here tonight. The win assured Laos the top spot in Group A with a maximum six points and also moved them a step closer to semifinals.

Laos, with two more matches to go against Malaysia and Thailand, are two points clear of second placed Thailand in the group and need to record good results in their remaining fixtures if they hope to make the last four.

“It was important that we pick up the full three points. It was a very close game against a tough opponent,” said Han Hyong Il, the chief coach of Laos after the match.

“We will have two more tough games to play for and we should keep to our target of a place in the semi-finals.”

In tonight’s match, Laos had two penalties awarded to them within a space of three minutes but only one was converted. Armisay Kettavong blew his penalty against the crossbar but Sonevilay Sihavong made no mistake by sending the ball to the right of the keeper.

Earlier in the first half, striker Anousay Nyavong sent over 10,000 fans to their feet when he smashed Laos ahead.

The hosts, as expected, were fired up by the strong home support and this resulted in their players taking the fight to their opponents. Indonesia were back-tracking and were constantly trying to put the brakes on the Laos attacks.

Despite breaking through on a few occasions, the Laos players were unable to go all the way. Towards the end of the half, Laos had several close calls, in fact, among the best chances they had in the game.

Thanin Phanthavong let loose a sizzler from outside the box but it drifted to the left of the goal. A few minutes later, Laos had an indirect freekick in the box but Sisawad Dalavong’s cruncher came off the wall and was quickly cleared. In the very last minute, Anousay Nyavong should have made his shot count but he widely blasted the ball at the near post.

Towards the end of the first half, in the 38th minute, Anousay managed to breach the defence to provide Laos with a slim lead going into the break. There were many more misses in the second half including the missed penalty in the 67th minute.

Two minutes later, referee Sukhbir Singh, awarded Laos a second penalty and this time Sonevilay converted. In the dying minutes, Thanin could have added a third but his shot crashed into the crossbar.

“In spite of the loss, I believe that we played our best game yet tonight,” added Mundari Karya, the chief coach of Indonesia.

“I’m satisfied with the performance but I just pity the boys to lose the game like that. They are young players.”