A BLAST FROM NATIONAL DEFENSE MINISTRY 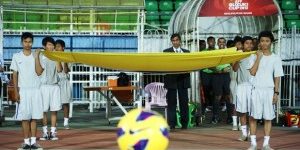 The score might just have been 1-0 (Thong Oudom in the 44th minute) to National Defense’s advantage in the first half but they completely turned on the power after the break to find the back of the net for five more times.

Plong Chanthou grabbed a hat-trick with goals in the 47th, 69th and 87th minute as Thong Oudom then completed his brace with the second goal on 70th minute of play.

The other goal in the game came off Surng Chan Vanno in the 70nd minute.

In the meantime, debutants Chhlam Samot made a winning start to their campaign when they edged out seasoned campaigners Build Bright United 3-2 at the same venue.

Oum Chandara had given Build Bright the best of start with the lead in the 27th minute but Chhlam Samot did not lose their composure when they scored three goals within the next half an hour.

Pov Samnang were on target on 32nd and 57th minute as Sanni Dauda then added the other goal on 45 minute for Chhlam Samot to take a 3-1 lead.

And while Pich Sina did manage a second goal for Build Bright in the 59th minute, there was no stopping Chhlam Samot from picking up the full points.