ZAYAR AND YANGON SHARE LEAD AT TOP OF MNL 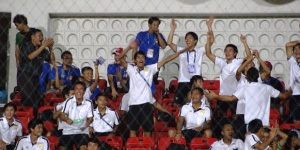 YANGON (18 April 2011) – Six matches into the Myanmar National League (MNL) 2011 season, two teams have shown that they are determined to win the crown this year as they romped to identical 15 points collected from the same number of games played.

Zayar Shwe Myay and Yangon United are currently at the top of the MNL with five wins and one defeat each.

Zayar Shwe Myay’s only loss in the league thus far was again Yangon United on 29 Jan 2011 which saw the latter winning 3-2 at the Yangon Training Centre.

But while Yangon were in the lead for much of last month, they had to surrender the MNL leadership last week following their shock 3-0 loss to Kanbawza FC.

Zayar went back to the top of the table with a slim 1-0 win over Magway which saw them having the lead on better goal difference.