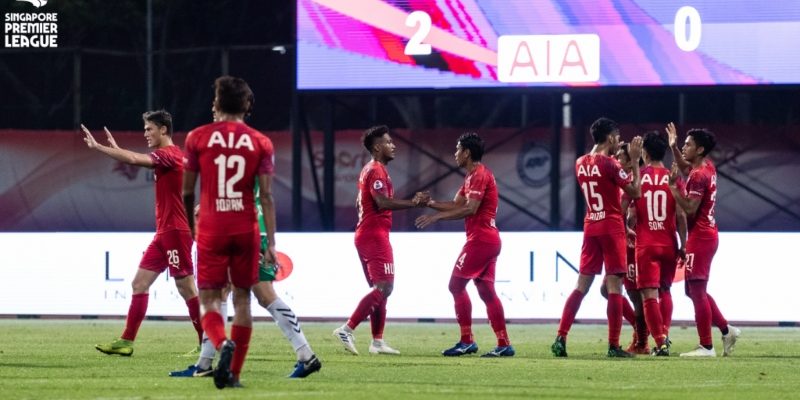 Adrian Pennock’s DPMM missed the opportunity to notch a club-record seventh consecutive home win after being frustrated by the Young Lions.

The hosts struggled to break down their visitors and did not trouble goalkeeper Kenji Rusydi too much, while Syukri Bashir will feel he could have done better at the other end when he shanked a header wide off an excellent cross from Zulqarnaen Suzliman.

Another big win for Hougang saw them move to within two points of leaders DPMM as they blitzed past the defending champions.

Faris Ramli got them started inside the first 10 minutes with a smart first-time finish off Amir Zalani’s cross and he was as clinical on the half-hour mark when he latched onto Kong Howon’s 50-yard ball and dispatched it past the goalkeeper.

It was 3-0 when youngster Nikesh Singh, who only made his professional debut in their last game, smashed in the rebound after M. Anumanthan’s shot came off the post.

Daizo Horikoshi gave Albirex a glimmer of hope when he fired in a low effort after robbing a defender, but Shahfiq Ghani soon restored the three-goal cushion by finishing off Stipe Plazibat’s pass on a counter-attack.

Poor marking allowed Yoshikatsu Hiraga to head in a corner deep into injury time but it was mere consolation for the White Swans.

Home United gave interim head coach Noh Rahman a winning start to his reign as they inflicted a second consecutive defeat upon the visitors. Anders Aplin’s under-hit back-pass was intercepted by Oliver Puflett and then dispatched beyond an exposed Hairul Syirhan for the opening goal.

The Australian then doubled his tally by deftly flicking in Adam Swandi’s cut-back a few minutes before the break, before Adam bundled in Faritz Hameed’s cross to all but seal the game.

There was a straight red for Barry Maguire with about 10 minutes left for a dangerous challenge, with Home captain Izzdin Shafiq following suit soon after, having appeared to talk himself into a red card.

Nine-time champions Warriors bagged their first point of the season at the sixth time of asking after coming from a goal down to hold Tampines. The visitors were looking to end a three-game win-less run in the league and went ahead through a precise free-kick from Shahdan Sulaiman.

But an error from goalkeeper Syazwan Buhari allowed Sahil Suhaimi to level and both sides had to settle for a share of the spoils.