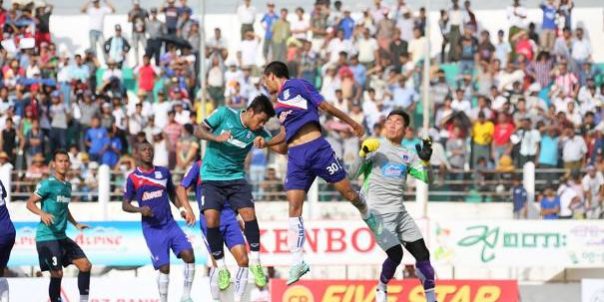 YANGON (9 July 2015) – Yangon United are in firm control of the Myanmar National League (MNL) 2015 as they beat defending champions Yadanarbon FC 3-2 this week to maintain their unbeaten run to 11 matches.

Even though it was Yadanarbon FC who went ahead first in the 20th minute through Aung Thu, the visitors tightened up their game to score three times through Kyi Linn (31st), Cezar (51) and Emerson (60th).

Shine Thuya did pull a second goal in the 66th minute, but it could not prevent from walking away with the full points.

What made the victory all the more fabulous other than winning on the road was the fact that it has allowed Yangon to open up a whopping eight-point lead at the top of the MNL.

Elsewhere, Magwe edged Kanbawza 2-1 with goals from Maung Maung Soe  in the 27th minute and Soe Min Naing (34th) as the visitors scored their only goal of the game through Obadin (42nd).

NayPyiTaw were held scoreless by Rakhine at home.