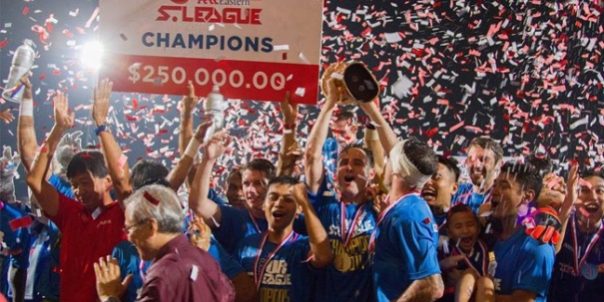 SINGAPORE (6 Nov 2014) –  The 19th season of the Great Eastern-Yeo’s S.League came to a thrilling conclusion at both the Choa Chu Kang and Jalan Besar Stadiums when Warriors FC pipped DPMM Brunei to the crown.

Entering the final match of their season on equal points with league leaders DPMM, the second-placed Warriors needed a win or a draw over Albirex Niigata at Choa Chu Kang, while hoping for the Bruneian outfit to falter against Tampines Roves at Jalan Besar. This is because DPMM – coached by former Blackburn Rover manager Steve Kean – would take the league championship on their superior scoring record with a draw or a win against Tampines.

The game began on a poignant note when Tampines Rovers and the Football Association of Singapore paid tribute to 44-year-old striker Aleksandar Duric who had announced his plans to retire after the game.

The Jalan Besar crowd gave the emotional Duric a standing ovation as the FAS played a short video of his career highlights. Duric was then reduced to tears as Tampines chairman Teo Hock Seng and FAS President Zainudin Nordin each gave him a gift.

Teo presented Duric with a framed Stags jersey that was autographed by all his teammates, while Zainudin gave the former Singapore international a Singapore jersey with the numbers ’24’ (indicating the number of goals he scored for Singapore) and ’53’ (the number of caps he had won since becoming a Singapore citizen in 2007) on the front and back respectively.

Both matches then began on a tentative note as Warriors and DPMM, feeling the butterflies, tried to settle their nerves quickly and settle into their respective missions.

At half-time, the 15kg, 67.5cm tall S.League trophy seemed headed to DPMM after both games ended 0-0 at the break. But Warriors striker Hafiz Rahim changed the equation in the 48th minute when he scored with a header, sending the Choa Chu Kang crowd into wild celebrations.

Over at Jalan Besar, DPMM supporters started feeling apprehensive when Duric was sent on as a second-half substitute for Stags striker Noh Alam Shah. The 2012 Suzuki Cup winner was roared on by the crowd whenever he touched the ball.

DPMM then found themselves under more pressure when Tampines scored twice in eight minutes in the second half. Stags midfielder Jozef Kaplan sent a firm grounder past DPMM keeper Azman Ilham in the 65th minute before teammate Miljan Mrdakovic scored in the 73rd minute.

DPMM regained some composure when Brazilian striker Rodrigo Tosi reduced the deficit in the 81st minute but the Bruneians just could not find the equaliser. Meanwhile, Warriors, sensing that they were on the verge of winning their ninth S.League title, held firm in defence against a rampaging Albirex with goalkeeper Hassan Sunny putting in a heroic display with several saves.

And then it was all over. As DPMM’s players dropped their heads and sank to the Jalan Besar turf in bitter disappointment, the Warriors celebrated the return of the S.League championship to their trophy cabinet after an absence of five long years.

“It has been a long season and the boys have done brilliantly to win the title,” said Warriors coach Alex Weaver who was lifted up and thrown in the air by his jubilant players at the end of the game.

“I’m just happy for everyone at the club, the players and the fans. We’ve won the title after such a long time and we’re back where we belong.”

His DPMM counterpart was downcast. “I can’t put into words this loss. It was very disappointing,” said Kean. “We’d been top of the league for most of the season but fell off it in the most important week of the campaign.”

S.League Chief Executive Officer Lim Chin said the thrilling finale was a fitting end to the season. “What a finish! It has been a very exciting season with little to separate the top few clubs in the final stages of the title race, and fans have been rewarded with footballing drama of the highest order on the last day.

“We now look forward to next Friday’s (7 November) RHB Singapore Cup final between Balestier Khalsa and Home United at Jalan Besar. May it be an equally spectacular encounter to bring the curtain down on the season.”

President Tony Tan Keng Yam will be the Guest of Honour at next week’s Cup final, while popular local musicians Jack and Rai, and a percussion performance by the various Institutes of Technical Education (ITE) will be part of the pre-match entertainment and festivities.