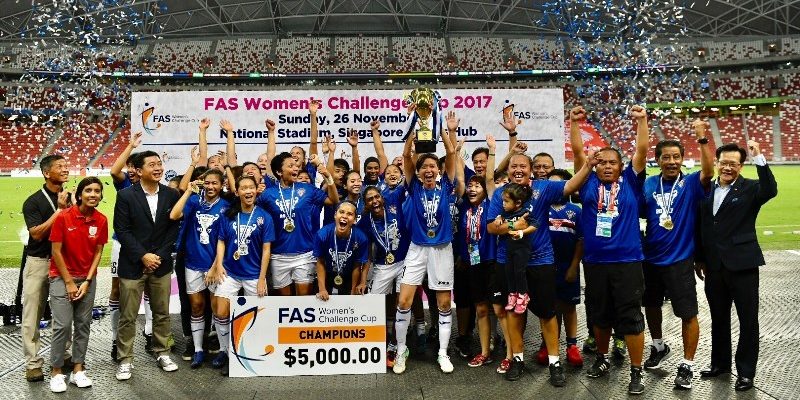 SINGAPORE (28 Nov 2017) – Warriors FC emerged victorious in the 2017 FAS-Sports Hub Women’s Challenge Cup to lift the Champions trophy for a second time. The team defeated Police Sports Association 1-4 in the Final at the National Stadium.

Besides the trophy and medals presentation for the FAS-Sports Hub Women’s Challenge Cup, prizes for the Women’s Premier League, Women’s National League and Women’s Youth League were also presented.

Ms Sharda Parvin commented: “Congratulations to Warriors FC for winning the FAS-Sports Hub Women’s Challenge Cup today and to all winners of the various Women’s tournaments. I am delighted to note that there was an increase in the number of participating teams across all women’s competitions this year. This is a great encouragement to the women’s football scene in Singapore as it shows that the level of interest among females is growing.

“The partnership with Singapore Sports Hub to host this year’s and the next two Finals at the National Stadium will certainly motivate our women footballers and we hope to see more teams joining us in this exciting sport next season.”

The results of the FAS-Sports Hub Women’s Challenge Cup are as follows: