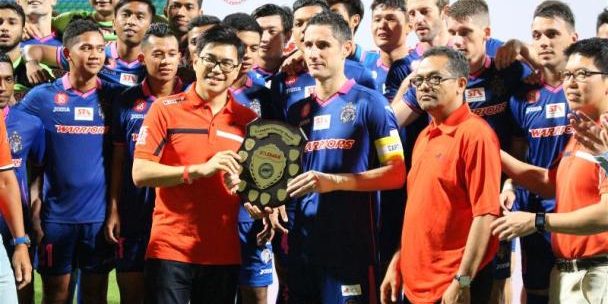 Nicolas Velez scored a solitary goal in the first-half, and it proved to be the difference between in a thrilling encounter. The win also gave Warriors three points as it doubles as a league match.

The first chance of the game fell for Velez in the third minute, but his attempt was charged down by Balestier defender Igor Cerina despite having plenty of space in the box.

Balestier responded in kind through right-back Yusiskandar Yusop’s long-range shot, but it was too high to trouble Neezam Aziz.

Three minutes later, Daniel Bennett had to make a last-ditch clearance from Miroslav Kristic’s cross as Robert Pericic lurked behind him.

Neezam was finally called into action in the 19th minute, as he had to palm away a stinging shot from Kristic after the latter found space in the six-yard box.

The deadlock was broken in the 27th minute, when Velez latched onto a pass down the left channel before cutting in and driving a grounder past Zaiful to give Warriors the lead.

It could have been 2-0 moments later, as Hafiz Rahim let fly from 25 yards. His shot seemed destined for the top corner, but Zaiful made an acrobatic save to push the ball over.

Balestier had a good chance to level the game just before the break, but Kristic only managed to divert his close-range shot onto the post.

The Tigers came out firing in the second-half, and their endeavours nearly yielded an equaliser in the 51st minute, when Tarik Cmajcanin’s cross-shot crashed off the bar.

Velez then should have scored his second goal just before the hour mark, but he headed over after meeting Hafiz’s cross.

Balestier goalkeeper Zaiful had to make yet another good save as he pushed away a point-blank header from Miroslav Pejic in the 67th minute.

The tie should have been over in the 83rd minute, but Pejic failed to make the most of a through-pass from Velez and hit wide.

The forward then saw another shot tipped away by Zaiful, before the referee signalled the end of the game and gave the Warriors their third Charity Shield.