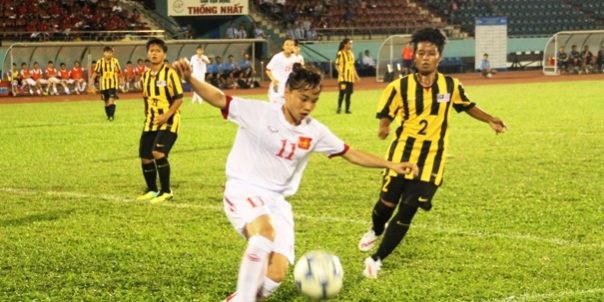 HO CHI MINH CITY (4 May 2015) – Malaysia tried hard but in the end Vietnam proved to be too hot to handle as the hosts romped to an easy 7-0 win in the second match of Group B of the AFF Women’s Championship here tonight at the Thong Nhat Stadium.

The match was hardly 55 seconds old and Vietnam had already opened account when Huynh Nhu blasted in from an acute angle as the Malaysian defence stood hapless.

Shattered by the early goal, the Malaysian girls tightened up play and tried holding on to the ball for longer periods. And they did quite well too as they continue to frustrate Vietnam until the end of the first half.

But the break would be pivotal as just two minutes in, Vietnam went ahead when Tran Thi Hong Nhung nodded home the corner from Nguyen Thi Muon.

Some hesitant defending in the 59th minute allowed Nguyen Thi Nguyet to slot home before Malaysia conceded a penalty three minutes later when Norsuriani Mazli was booked for the second time by Thai referee Patchaya Boonprasit.

Huynh Nhu did not hesitate from the spot to make it goal No. 4.

Nguyen Thi Tuyet Dung then stepped up with a superbly taken corner in the 78th which swung in straight into Malaysian keeper’s Asma Junaidi goal. She did it again from the other corner in the 90th minute as in between, a stabbing goal in the 82nd minute ensured Tuyet Dung her hat-trick in the game.