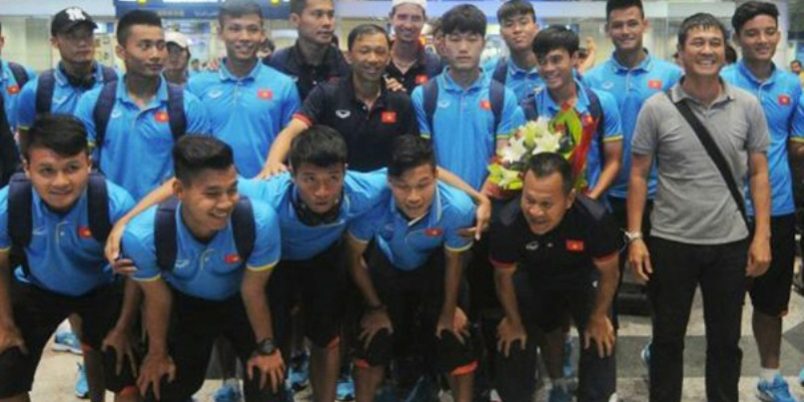 KUALA LUMPUR (10 Aug 2017) – The Vietnam men’s football team was the fist batch to arrive in Kuala Lumpur for the 29th SEA Games KL2017 – all fired up to put up a strong challenge and improve on their bronze medal achievement in their last campaign.

The Vietnamese, a five-time silver medallist but has never won the coveted SEA Games football gold, are drawn in Group B, considered as the ‘Group of Death’ as they have Thailand, Indonesia, Cambodia, Timor Leste and the Philippines for company in their campaign.

“Yes, we are in a very strong group, it will not be easy against such opposition. We came here hoping to do our best but it’s too early to say anything. I believe every team has an equal chance at the gold medal,” said head coach, Nguyen Huu Thang upon arrival at the Kuala Lumpur International Airport.

“I don’t want to predict anything but the first match is always very important. Of course, Vietnam would like to be champions and win the gold medal but so do the other teams,” he said with a wryly smile.

“Let’s just wait and see for the football competition to begin on 14 August. Its only four more days to go.”

The Vietnamese, who won the bronze after beating Indonesia 5-0 in the last Games in Singapore, arrived from Seoul, South Korea following two friendly matches in their preparation for the KL2017 Games.