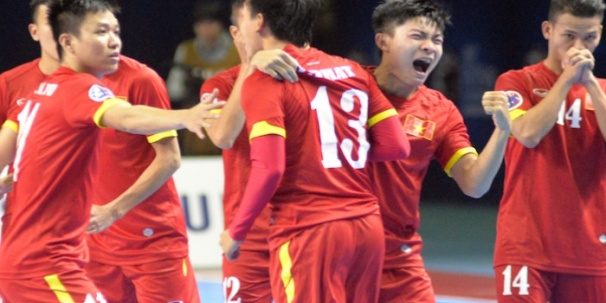 HANOI (18 Feb 2016) – Phung Trong Luan scored the decisive penalty as Vietnam edged out defending champions Japan 2-1 on penalties in Wednesday’s AFC Futsal Championship quarter-final following a 4-4 draw after extra-time to secure a place in the semi-finals for the first time and qualification for a maiden FIFA Futsal World Cup.

After normal time had ended 3-3 at Universal Stadium, Kaoru Morioka had put Japan back in front after two minutes of extra-time only for Tran Thai Huy to equalise with two minutes remaining.

And after Morioka’s first penalty was ruled not to have crossed the line and with Kazuhiro Nibuya’s shot also saved by Nguyen Dinh Y Hoa, Phung’s penalty made history as Vietnam secured a place in the semi-finals of the AFC Futsal Championship for the first time as well as qualification to their first ever FIFA Futsal World Cup.

Vietnam made a strong start, but it was Japan who opened the scoring against the run of play as Ryosuke Nishitani squared the ball for Nibuya to slide home in the eighth minute following a counterattack.

And five minutes later Morioka slammed home a direct free-kick from midway inside the Vietnam half to double Japan’s advantage.

Vietnam, though, reduced the deficit with six minutes remaining in the first half courtesy of Tran Van Vu curling home a delightful free-kick.

But after a tense start to the second half, Japan restored their two-goal advantage as Nibuya’s deflected strike from midway inside the Vietnam half found the back of the net.

Vietnam remained positive and once again responded as Danh Phat found himself in space on the right, evaded Morioka and chipped his shot past Japan goalkeeper Yushi Sekiguchi in the 34th minute to set up a grandstand finish.

And Vietnam launched a series of furious powerplays over the final two minutes and were again rewarded when Tran Van Vu waltzed to the left of the Japan goal and threaded a shot through into the far corner to make it 3-3 with 78 seconds remaining.

But with no further goals the match went to extra-time, Morioka drove a shot high into the roof of the net from the left of the Vietnam goal in the second minute of the first period to again hand Japan the lead.

Remarkably, though, Vietnam once again found a way back as Tran Thai Huy drove home a powerful shot from the left in the 48th minute to send the contest to penalties for Phung to create history.