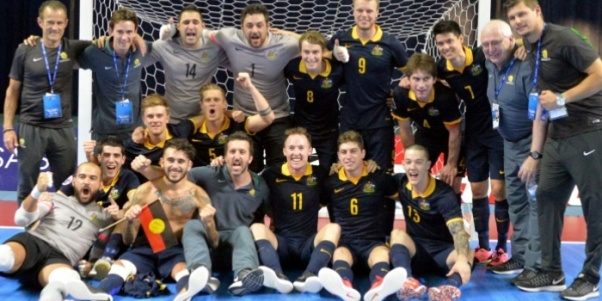 SYDNEY (20 Feb 2016) – Ecstatic Australian coach Rob Varela described his side as the best ‘amateur team’ in Asia after they qualified for this year’s FIFA Futsal World Cup by defeating Kyrgyzstan 3-1 to take fifth place at the AFC Futsal Championshipon Friday.

With only two overseas-based players in his squad, the team had to make a series of sacrifices including giving up professional opportunities just to compete at the tournament.

“The boys worked very, very hard; we got together for this particular campaign in early December and basically had 12 training sessions which is what most countries do every two weeks,” said Varela.

“Everyone has other commitments with local futsal, football and study or work – none of us are professionals and I think we’ve proved we’re the best amateur team in the tournament.

“I had to quit my job to come here and my private, professional life is based around futsal which is a non-paying hobby – a very satisfying – but non paying hobby but I wouldn’t swap it for anything.

“I just might have to find another short-term job before September’s World Cup comes around!”

A dominant Australian performance was perhaps not reflected in the final scoreline but Varela was thrilled with his side’s efforts.

“We did a fair bit of work on Kyrgyzstan both last night and this morning and knew how they were likely to play, we defended strongly as we always do and retained the ball well and things went exactly to plan and that’s the main thing,” he added.

The celebrations are likely to be conducted mid-air as the team had to depart immediately for the airport to catch a flight back home, but for their rivals it was a disappointing end to what had been a breakthrough tournament.

“Congratulations to Australia but we played a terrible first half. In the second half we tried to use our speed and we improved but the first half was terrible,” said Kyrgyzstan coach Andrey Polkhovskiy.

“I can only thank my players for the second half because this was such an important game but Australia fully capitalised on our mistakes.”