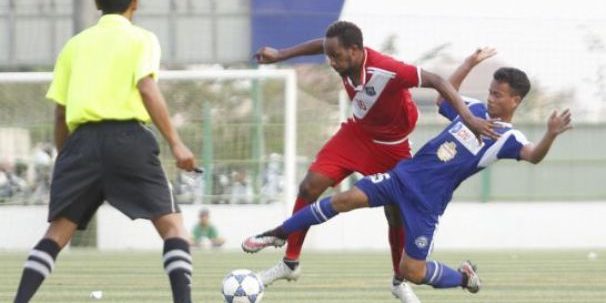 PHNOM PENH (14 April 2016) – Undefeated Preah Khan Reach Svay Rieng took advantage of a stumbling National Defense FC to move to the top of the Metfone Cambodia League with a 3-1 win over Western Phnom Penh this week.

In the match that was played at the Western Stadium, midfielder Chea Samnang was on the double as Sam Oeun Pidor nailed the other for the win.

Western’s only goal of the game was through Matthew Osa‘s penalty.

Former League leaders National Defense FC failed to get the better of defending champions Phnom Penh Crown when they fell to a 2-1 loss at the Old Stadium.

Phnom Penh put their noses in front when Leng Makara headed in the freekick from Seut Baraing in the 34th minute before doubling the advantage through George Kelechi some time later.

National Defense grabbed the consolation off Myong-ho Choe in the 74th minute for their first loss of the season which saw them slipped down to third at the standings.

Elsewhere, National Police drew 2-2 against the Cambodian Mines Action Center; NagaWorld edged Asia Europe United 1-0 with Tum Saray scoring the only goal of the game six minutes to the end.