U18: Vietnam keep up pressure in Group B 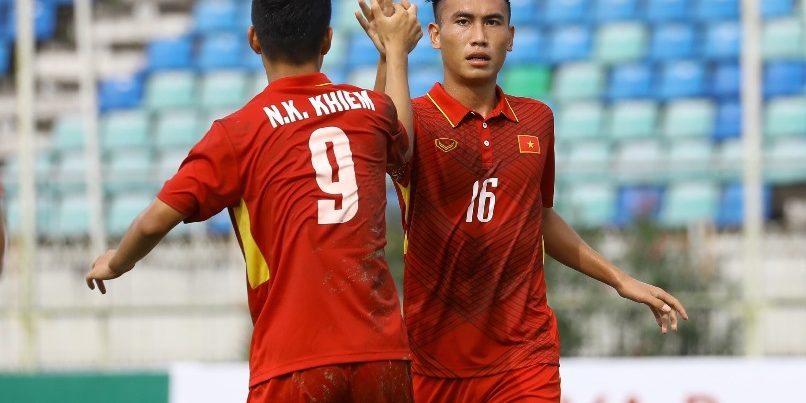 YANGON (9 Sept 2017) – Vietnam kept up the pressure at the top of Group B of the AFF Under-18 Championship when they blasted the Philippines 5-0 on the third match day of the group at the Thuwunna Stadium.

The Philippines, who were roasted 9-0 by Indonesia, in their previous game were a lot more determined to stem the tide as they defended in numbers to fend off the onslaught from Vietnam.

They held off the triumvirate of Nguyen Huu Thang, Nguyen Khac Khiem and Tran Van Cong in the first quarter of the hour before a defensive lapse in the 21st minute  allowed Van Cong the chance to stab home for the lead.

“We are taking it one game at a time,” said Vietnam captain Thi Ba Sang. “The target is just to make the final first. Then we will take it from there.”

But while credit should be given to the Philippines for at least putting up a semblance of a fight, still that momentary loss of concentration would once again haunt them in the closing stages of the first half as Vietnam blitzed in two quick goals for a 3-0 advantage going into the break.

Vietn Anh nodded home the cross from Le Van Xuan while Van Cong was also on target from a similar situation.

Vietnam stepped off the gas somewhat soon after that knowing full well that a win would ensure that they are on par – at least on points – with Indonesia, who are having the day off.

The Philippines tried to push forward as they tried to catch Vietnam on the break but the lack of experience meant that their struggles would continue.

Tran Bao Toan executed a superb freekick on 76 minute to put Vietnam in a comfortable position while a late header from Truong Tien Anh rounded things off as Vietnam took over the position at the top of the standings.

“It was another lesson for us,” said Marcel Ouano. “We tried very hard to compete in this game.”