U18: Three-way fight in Group B 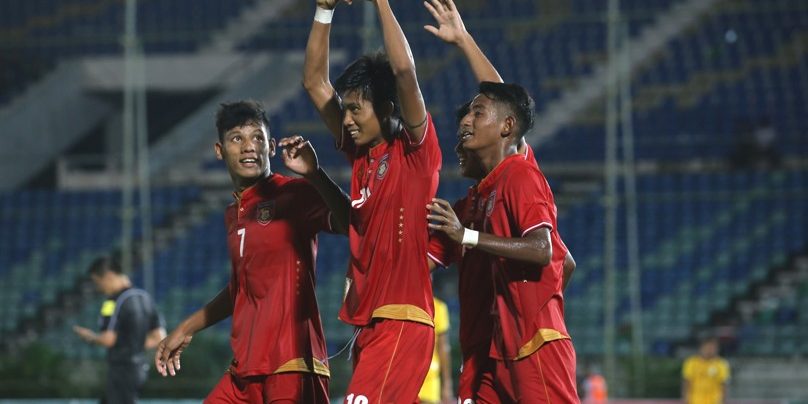 YANGON (9 Sept 2017) – Myanmar made it a three-way fight in Group B for the two places into the semi-finals of the AFF Under-18 Championship following their 7-0 thumping win over a hapless Brunei side at the Thuwunna Stadium.

With Vietnam having whitewashed the Philippines 5-0 in an earlier tie to take control of the group, the pressure was on hosts Myanmar to pick up the gauntlet and bring the fight to Brunei.

“We were under pressure to perform after the last game,” said Win Naing Tun, who scored four goals in the game. “The win has put us in a good frame of mind for the next match.”

For Brunei, the pressure was on them to regain some measure of respect following their humiliating 8-1 loss to Vietnam previously.

And certainly they did not back down against a robust Myanmar side, who was eager to get back into winning ways following their shock defeat to Indonesia in their first game of the competition.

On attack mode from the get-go, Myanmar did not take too long to prise open the lead with Eant Maw Oo firing in from some 25metres out in the ninth minute.

Brunei kept it tight at the back to stem the tide but in the 24th minute, they fell further behind when a cross from Myat Kaung Khant from the right was headed into goal by the unmarked Naing Ko Ko.

By then, Brunei seem to have given up putting up a fight as Naing Tun scored the first of his first four goals with a cross from the left for them to be 3-0 at the break.

Aung Tun then made it a grand night for Myanmar and himself with the seventh goal of the game with a penalty in the 77th minute.

“We wanted to win this game so badly but after conceding the first few goals, we seem to have given up,” said Abdul Hariz Herman.

1500: Cambodia vs Malaysia (at Thuwunna Stadium)

1800: Singapore vs Thailand (at Thuwunna Stadium)