U18: Thais on winning track 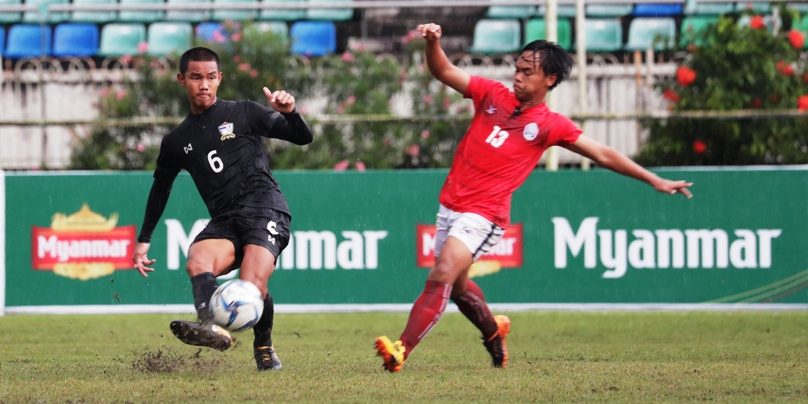 YANGON (8 Sept 2017) – Thailand kept up their winning ways in Group A of the AFF Under-18 Championship when they beat Cambodia 1-0 for them to pick up their third full points of the competition.

After having beaten Timor Leste (3-0) in their first game and then Laos (2-1) previously, the win over Cambodia today ensured that they remain on course for a place in the semi-finals of the championship this year.

“We did not play exceptionally well today and there are areas which we need to improve,” said midfielder Nattawut Chootiwat. “Of course, we aim to win the overall title this year and it is good that we have maintained our winning effort.”

The heavy downpour once again dictated the pace and rhythm of the match as both Thailand and Cambodia made hard adjustments to their playing style.

The Thais were pushing hard for the lead but the rain seem to have played into Cambodia’s hand as they defended well at the back while at the same time, created some chances of their own.

Danusorn Somchob missed a sitter at the half hour while some time later, a rifling shot from Naravit Kaosantia came off the crossbar with Cambodian keeper Chea Vansak well beaten.

But it took the Thais just a minute into the second half to carve out the lead when Danusorn headed home a freekick from the right to put them in the right frame of mind for the finish.

Cambodia were not without their chances but Teat Kimheng nor Seth Mann South could get the better of the Thai stable backline.

“We came close a few times but that was about it,” said Teat. “It is disappointing to lose against Thailand today.”

In the meantime, Singapore bounced back from their defeat to Malaysia in their previous game to beat Laos 3-0 at the Aung San Stadium.

Daniel Goh grabbed the opener after 28 minute and Mohd Rafikin Kamal (42nd) and then Idraki Mohd Adnan scored the others for Singapore’s second win of their campaign.