U18: Thais win crown in a three-minute blitz 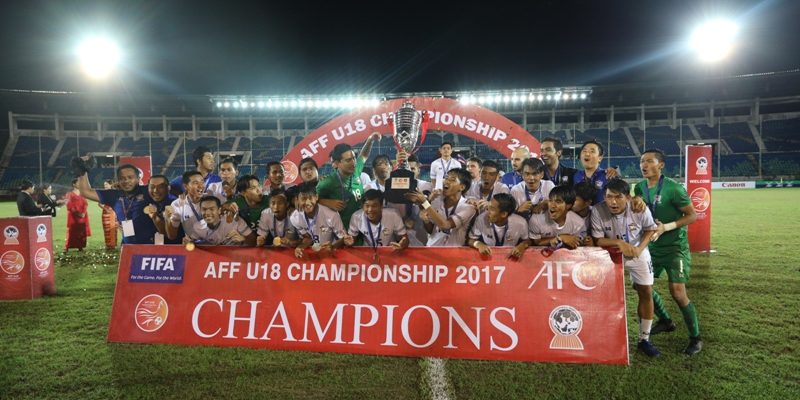 YANGON (17 Sept 2017) – Thailand won the AFF Under-18 Championship this year where a three-minute blitz gave them a hard fought 2-0 win over Malaysia in the final that was played at the Thuwunna Stadium.

What made the win more fabulous for the Thais was the fact that they had to play with ten men towards the end of the exhilarating tie when Wudtichai Kumkeam picked up his second yellow card in the 67th minute.

“It has been a tough tournament all around,” said striker Ekanit Panya after the game. “But we have grown as a team and this victory will give us confidence for the future.”

The absence of fans at the stand did not deter neither Malaysia nor Thailand from playing an attractive brand of football.

It was Malaysia who got the first real crack at goal when as early as the sixth minute, Muhammad Akhyar Abdul Rashid fired in a grounder that although had Thai keeper Kantaphat Manpati beaten, came off the cross bar instead.

That was to be the only bright effort from the Malaysians as Thailand absorbed all the offensive play for much of the first half as they struggled to put some dominance in midfield.

The introduction of Ekanit and Yuthapichal Lertlum eight minutes before the breather had an instant impact when the latter rushed into the Malaysian box for a shot that was well blocked by custodian Muhammad Azri Abdul Ghani.

And it took Thailand just three minutes into the second half for them to grab the lead where off some hesitant Malaysian clearance, Ekanit nodded home the cross from Naravit Kaosantia.

Malaysia tried to get back into the game by bringing in the pace of Muhammad Nurfais Johari and for a while, they managed to press forward.

It was in the 67th minute that Wudtichai was sent off when he took down Malaysian keeper Muhammad Azri from a corner.

As time trickled down, Malaysia earned a penalty right at the end but Muhammad Zafuan Azeman failed to score when Kantaphat judged the direction well.

“The two quick goals at the start of the second half affected the team adversely,” said Muhammad Hadi Fayyad Abdul Razak. “We tried to get back into the game but we failed.”