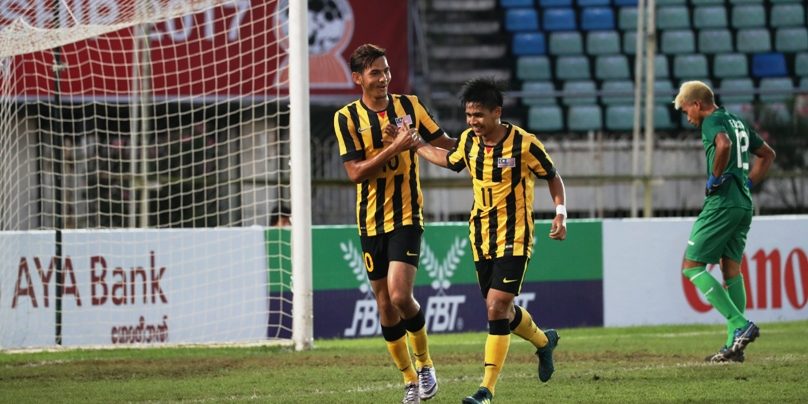 YANGON (8 Sept 2017) – Scrappy Malaysia scraped through for their third win in Group A of the AFF Under-18 Championship following their close 3-0 win over Timor Leste at the Thuwunna Stadium.

The win and their third full points of their campaign made sure that the Malaysians keep up with Thailand, who had earlier beaten Cambodia by the same score line.

“We did not play exceptionally well today but we did just enough to win the three points,” said Muhammad Hadi Fayyadh Abdul Razak. “Obviously, we need to be better in the next game.”

Timor Leste, who are still searching for their first win in the group following their loss to Thailand in their first game and then the drawn tie against Cambodia in their second encounter, were not making things easy for the Malaysians.

But in their eagerness to strike the first blow, a mistake at the back allowed the nippy Muhammad Akhyar Abdul Rashid to run the ball in to beat keeper Fernando Da Costa.

Clearly frustrated, Timor then regrouped to pressure the Malaysians where they went for every ball and did not allow their opponents much space to add to the score line.

Timor had a few chances that came their way but neither Joao Soares nor strike partner Lourenco Ximenes could make any of it count.

The second half was very much the same as it was in the first but the Malaysians were quick to pounce on their first real chance after the break with Nabil Hakim Bokhari providing the cross and Muhammad Nurfais Johari blasting in from the far post.

The few substitutions for both teams disrupted flow somewhat as the game became entrenched at the centre of the park and Timor becoming increasingly frustrated.

A minute to the end, Ximenes created his best chance of the evening with a solo run to beat three defenders but just could not find the final touch to beat Malaysian keeper Muhammad Aiman Arip Zulkarnain.

That failure saw the Malaysian grabbing the chance to score their third goal of the game with Muhammad Akhyar’s run down the left before squaring the ball to substitute Saiful Iskandar Adha Saiful Azlan.

“We competed for everything tonight but things just did not happen,” said Ximenes. “It was so very disappointing.”