U18: Malaysia book place in semi-finals 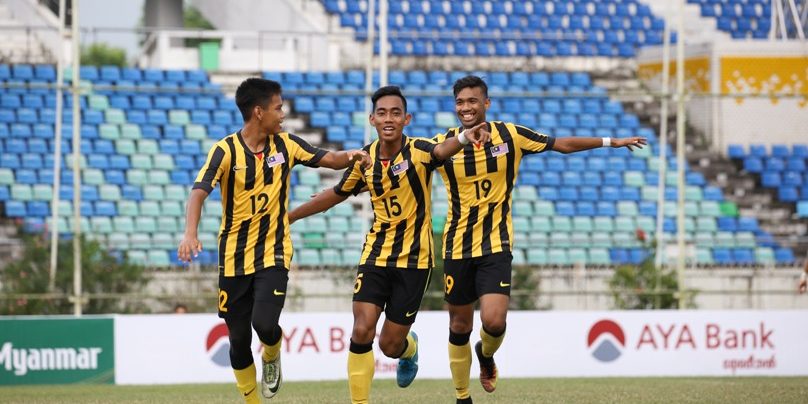 YANGON (10 Sept 2017) – Malaysia booked their place in the semi-finals of the AFF Under-18 Championship when they did just enough to beat Cambodia 2-0 in a Group A tie at the Thuwunna Stadium this afternoon.

The win over the Cambodians were Malaysia’s fourth win on a trot while at the other side of the city, Timor Leste had a late goal from Joao Soares to thank for their first win in the group.

“It was very hot today and the Cambodians certainly did not make things easy for us,” said captain Muhammad Syaiful Alias. “For us, we are just looking forward to the next match (against Thailand) and not even thinking of the semi-finals as yet.”

The Malaysians were a little off the pace at the start with Cambodia taking the early initiative through Touch Kimchay and Teat Kimheng but they just can’t seem to find their way through the Malaysian backline.

It took the Malaysians 22 minutes to break the deadlock when Shafizi Iqmal Khirudin stabbed home the cross from Saiful Iskandar Adha Saiful Azlan.

The game fell into a big doldrum soon after with several unnecessary stoppages that affected the flow of the game.

Much of the battle was restricted to the middle of the park with neither teams really carving out real chances well into the second half.

Seven minutes in, the Malaysians then blasted in their second goal through Muhammad Syafiq Danial Romzi stinging shot from some 20metres to put them comfortably in front.

“Malaysia were not a very good team,” said Cambodian defender Chhoeung Visinu. “We lost the game today because we did not do enough to win it.”

The score at the end of the pulsating first half was even 2-2 – with Chanthachone Thinolath (15th) and Lektoxa Thongsavath (16th) goals for Laos being cancelled out by Soares (30th) and Lourenco Ximenes (41st).

Then came the winner from Soares in the 68th minute for Timor Leste’s first full points of their campaign.